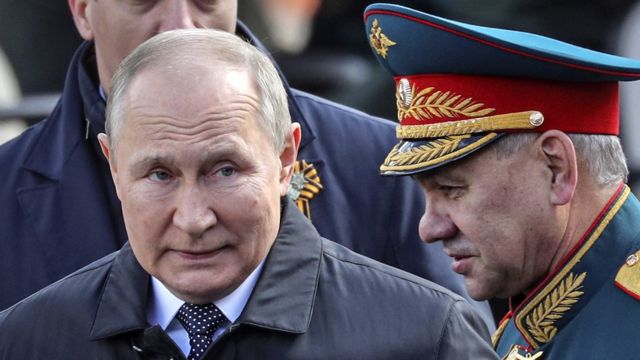 Russian President Vladimir Putin, speaking on Red Square during the Victory Parade, devoted the bulk of his speech to justifying the invasion of Ukraine, rather than victory in the Great Patriotic War. He did not speak about the general mobilization and the declaration of war on Ukraine, contrary to the fears that arose after media reports.

What did Putin say

At the beginning of his speech, Putin mentioned not only the victory of May 9, but also the achievements of the Minin and Pozharsky militia, recalled the battle on the Borodino field, and then, speaking of the Great Patriotic War, he mentioned Kyiv, Kharkov and Sevastopol among Russian cities.

And immediately after that, he abruptly switched to the war, which began on his decision on February 24 and which he called “a special military operation.” Western media suggested that it was on May 9 that Putin could declare war on Ukraine instead of an “operation”.

“So now [as during the war with Hitler’s Germany] these days you are fighting for our people in the Donbass, for the security of our homeland – Russia,” Putin proclaimed.

According to him, the “valiant generation of victors” – those who crushed fascism – bequeathed “we to be vigilant.”

The Russian president recalled that in December, Moscow submitted proposals on security guarantees to the United States and NATO. “Russia called on the West to an honest dialogue… All in vain,” Putin says. “The NATO countries did not want to hear us.”

“Which means that they actually had completely different plans, and we saw it,” he continued. Once again, Putin said that preparations were underway for “another punitive operation in the Donbass.” Not for the first time, the Russian president also recalled that “in Kyiv they announced the possible acquisition of nuclear weapons.”Skip the Podcast and continue reading.PodcastWhat was it?

We quickly, simply and clearly explain what happened, why it is important and what will happen next.

“A threat that is absolutely unacceptable to us has been systematically created,” Putin asserts. “Moreover, directly at our borders.”

Not for the first time, but for the first time, at the Victory Day parade, Putin said that hostilities in the Donbass were supposedly “inevitable”: according to him, military infrastructure was deployed in Ukraine, “hundreds of foreign advisers” arrived there and danger ” growing every day.”

“Russia gave a preemptive rebuff to aggression against aggression,” he once again formulated his position, justifying the attack on Ukraine, which killed thousands of people, including civilians. According to him, it was “the only right decision” taken by a “sovereign” country.

In his speech at the parade in honor of the Victory, Putin did not forget the idea that in the West they decided to “cancel” “thousand-year-old values”, while Russia, in his words, “has a different character.” There were also words about “inciting Russophobia” and “praising traitors.” After that, he again returned to the war against Ukraine.

“Today, the Donbass militia, together with the Russian army, are fighting on their own land,” Putin said.

Addressing the Russian armed forces and “Donbass militias,” he said: “You are fighting for your homeland. For its future.” “To ensure that no one forgets the lessons of World War II,” the Russian president added. And for the fact that, in his words, “there is no place in the world for executioners, punishers and Nazis.”

Then Putin returned from the events of those days to 2014, uttering the phrase about “the martyrs of Odessa, burned alive,” and spoke about the victims of hostilities in the Donbass.

Declaring a minute of silence, Putin urged to bow their heads before those who died “the death of the brave” in the struggle for Russia. As a result, it turned out that a moment of silence this year was announced by the President of Russia, including for the Russian military who died in Ukraine.

After a minute of silence, he spoke about the support that the state and enterprises “should provide to the relatives of the dead military”, and announced that “including those who arrived from the Donbass – directly from the combat zone” take part in the parade on Red Square. (the media wrote about it the day before).

“Today you are defending what your fathers, grandfathers, great-grandfathers fought for,” Putin once again gave instructions. “Loyalty to the Fatherland is the main value.”

Only at the end of his speech did he return to the “generation of victors”, in whose honor a parade was always held on Red Square, promising to emulate him, but immediately switched back to modernity: “Glory to our valiant armed forces. For Russia, for the victory. Hooray! “

The Russian anthem played. In Putin’s speech, there was no assessment of the course of hostilities that Russia is waging against Ukraine. Nothing was said about general mobilization, nor about the official declaration of war on Ukraine. This possibility was reported by the American media, and after the dissemination of this information in social networks, a wave of fears arose about the conscription of reservists to the war.

Kyiv rejected Putin’s arguments. “NATO countries were not going to attack Russia. Ukraine did not plan to attack Crimea. The Russian military are dying not defending their country, but trying to occupy another,” Mikhail Podolyak, adviser to the head of the presidential office of Ukraine, wrote on Twitter. “NATO, Britain, the countries of Eastern Europe have never planned and do not plan to invade Russia,” British Defense Secretary Ben Wallace said, commenting on Putin’s speech at the parade on Red Square.

Pavel Aksenov, correspondent for the NEWS, on how the parade went

In 2022, the Victory Parade in Moscow was much more “modest” than in previous years. Fewer servicemen and military equipment participated in it, which became known in advance – the Russian Ministry of Defense published the plan for the parade at the end of April.

Some of the combat vehicles that are usually shown in parades were missing, and many experts or bloggers considered this a sign that Russia simply did not have enough equipment – supposedly it is fighting in Ukraine. It is impossible to confirm this from open sources, but the Pantsir, T-80BVM and Solntsepeki air defense systems that were absent from the parade really appear on the video from the war zones.

In the technical part, the parade on Red Square was similar to the previous ones. On it, in addition to the old equipment, modern ones were also shown: the T-14 Armata tanks, the Kurganets infantry fighting vehicle, and the Boomerangs. They have been passing through Red Square every May 9 since 2015, just like the Uran-9 combat robots, which were shown later. None of these systems were seen in combat – they can only be seen at parades and military exhibitions.

The absence of aircraft meant that during the entire parade on and over Red Square, the symbol of what is called in Russia a “special military operation” – the letter Z – was never displayed.

On May 3, CNN speculated that Putin could officially declare war on Ukraine on May 9 and begin mobilizing conscripts as “invasion efforts continue to falter.” The TV company referred to the opinion of Western officials. They believe that Putin should have taken advantage of the “symbolic meaning and propaganda value of this day” to announce either a military achievement in Ukraine or a major escalation in hostilities (or both).

“A formal declaration of war on May 9 has the potential to boost public support for an invasion. It also allows Putin, according to Russian law, to mobilize reserve forces and conscripts that [Western] officials say Russia desperately needs [in Ukraine],” stated in the material.

A Kremlin spokesman called the CNN report “nonsense.” Answering the question of journalists whether it is worth listening to Western media reports that the Russian leadership may announce mobilization on May 9, Peskov said: “No, it’s not worth it.” “It’s not true, it’s nonsense,” he added.

The Russian invasion of Ukraine began on 24 February. On March 5, Putin said that conscripts were not sent and would not be sent to Ukraine, but then such cases were officially recognized by the Russian authorities. They insist that it is not a war that has been going on in Ukraine since February, but a “special military operation.”

The fact that Putin’s Victory Day speech could shed light on the future of the war, which he unleashed on February 24 with an unsuccessful assault on Kyiv, was also reported by Reuters the day before. Russia’s efforts to invade Ukraine were accompanied by logistical and weapon problems, as well as heavy losses in the face of fierce Ukrainian resistance, the agency noted.

Observers called Mariupol, where the fighters at the Azovstal plant still hold the line, the main obstacle to the possibility of declaring a “mission accomplished”. The Ukrainian military and Western intelligence agencies also reported difficulties with the advance of Russian troops in the Donbass. The Russian Ministry of Defense in the latest reports reported on air and missile strikes, and not on the advance of troops in eastern Ukraine.

On Saturday, CIA Director William Burns said that Putin intends to continue the war in Ukraine because he does not believe he can afford to be defeated. He spoke about this at an event organized by the Financial Times.

“He’s in a mood where he doesn’t believe he can afford to lose,” Burns said. “I think he’s convinced now that doubling down will still allow him to make progress.”

At the same time, martial law is introduced on the territory of Russia or in its individual areas with an immediate notification of this to the Federation Council and the State Duma, the law says.

Able to cause a radioactive tsunami and destroy cities: what is known about the Russian Poseidon torpedo