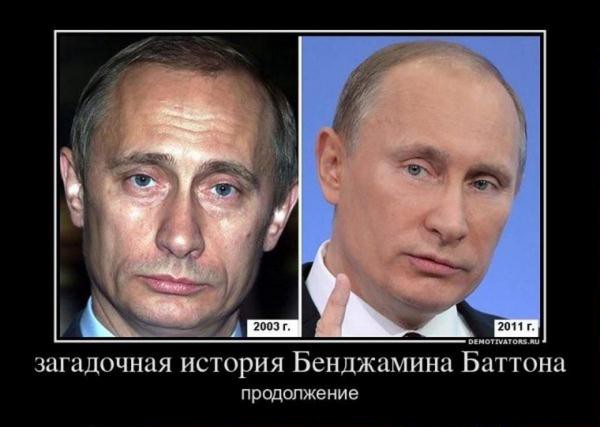 I want to apologize right away: this text will be a little moronic, by about 33%, and not because many can argue that I myself am a little moronic, no, but because we have little information on the subject and one of the evidence is moronic .

There is an opinion that infa about Putin’s doubles plays into the hands of the Russian propaganda as an operation to cover up plastic surgeries. Well, you know, this, I tell you, WATCHING HOW TO WRITE, because there are always two ends to a stick smile emoticon What if something like this: “Putin’s doubles went on strike: Udmurt refuses to play hockey, Bruise demands elite alcohol, and Deutsch. Drishcha was given to Tiger Amur instead of Goat Timur. For we are unteachable,” read about it in an independent investigation about how PUTIN’S TWINS DESTROY RUSSIA…

So, to the point: in total I have 3 main proofs:

05/09/2016: Putin receives the Victory Parade while sitting and holding on to a guard during the procession of the Immortal Regiment

05/10/2016: Putin scores one goal in an NHL hockey game Table of Putin’s doubles (this is moronic evidence, but it exists, nothing can be done)

3. Let’s start with a moronic proof: the comparison table of twins is, of course, playful, but over the years people began to notice the differences between twins, google, you will find a lot of texts and pictures on the topic. The table is needed to legend comrades Sinyak, Banquet, Udmurt, etc. for the purposes of this text. “Putin took the parade while sitting, because of a latent illness” – this is written by the enemy media, we do not know anything about diseases and the health of our Captain in general, except for official information. In general, it would be good to know full information about the health of the Great Leader. I hope this is not a state secret? Navalny, where are you when you are needed? Get busy, don’t flap your ears 🙂 Regarding the “reception of the parade while sitting” – this is unheard of: neither Soviet nor Russian leaders allowed themselves such a thing. Is there any good reason for this, perhaps?

2. “Putin scored only one goal in the Night Hockey League gala game.” We conclude: the banquet hall is broken, and an Udmurt or a bruise plays hockey, as I see it. Although there may be options 🙂 Why, a day after I sat through the entire parade, and during the Immortal Regiment held on to the guard (look carefully, there is a photo), play hockey? That’s right: to prove that he is healthy. There is a large photo of that Udmurt or a bruise who plays hockey: experts, check which one it is? It seems to me that this is Udmurt, but I could be wrong …